In August 2017, Limerick City and County Council announced that it was commencing the process of developing a new Limerick Transport Strategy. At the time it envisaged expert transport advisers being appointed by the end of the year, with work on the strategy to begin in early 2018. Limerick City and County Council issued a statement in spring 2018 stating that there had “been no delay………in developing a transport strategy for Limerick” but in May 2019 the transport strategy has still not been published.

In the meantime public transport in Limerick has gone from bad to worse and Cork has announced a €3.5 billion transport strategy. The most ambitious element of Cork’s transport strategy, which as a whole is expected to generate a return of almost €9 billion for the local economy, is the development of a €1 billion light rail network. The route will be approximately 17km in length, include 25 stops and run from Ballincollig to Mahon Point, initially carrying 4,600 passengers in each direction every hour (with the possibility of increasing this figure to 11,400 passengers by increasing the frequency of the trams). The route will service approximately 32% of Cork’s metropolitan population and around 60% of all future employment.

Light rail has been a massive success in Dublin and indeed in many cities across Europe. Latest figures show that numbers on the LUAS increased by 10.26% to 37.6 million passengers in 2017. In the last eight years alone passenger traffic on the LUAS has grown by 50 per cent and since the two lines were connected in 2016 revenues are up more than 30 per cent on the Green line and 7 per cent on the Red line. Passengers simply love trams and it’s easy to see why.

Trams can carry large numbers of people and, unlike a bus, capacity can be easily increased during peak times by adding extra cars without the need to hire more drivers.

Trams offer better access for people with reduced mobility, parents with prams and people with heavy luggage as station platforms are designed so that they are at exactly the same level as the tram floors. Most modern trams also have significantly wider aisles than buses, further facilitating access and comfortable circulation within the vehicle.

Trams also have a sense of permanence, inspiring confidence in residents who know that the route won’t be changed at the whim of the transport authorities or the operating company. This makes it easier for residents to plan journeys and for businesses to invest and develop along the lines and around stations.

Trams are quicker and more reliable than buses. They are less likely to break down and can be given priority ahead of other road users through the use of detection systems that ensure they have priority at traffic lights, roundabouts and level crossings. Trams can also run on 100% dedicated tracks which means they won’t become stuck in motor traffic.

Trams produce no emissions in situ and therefore do not contribute to air pollution in the city. Trams also produce three times less C02 than travelling by car and are generally quieter than diesel buses and therefore generate less in the way of noise pollution.

Trams can also improve the image of a city, raise a city’s profile and contribute to economic regeneration. A new tram is a visible, permanent way of showing that an area is being invested in for the future. It attracts businesses and tourists, and helps people access jobs and services.

According to a submission made to the government in 2017 by the councils of Limerick, Clare and Tipperary, together with the University of Limerick and the Limerick Institute of Technology, the Limerick metropolitan area should be developed to cater for a population of 300,000 people by the year 2040. If this is to become a reality, Limerick needs to urgently develop a transport strategy and consider seriously the development of a light rail network that will allow the city to reach its true potential.

While the long term goal must be to develop a network covering the entire city, the first phase would see the connection of the most densely populated residential areas, key business parks, hospitals and educational facilities.

The route would see the two most densely populated residential areas in Limerick (Dooradoyle and Castletroy) connected with the city centre, making it easier for people to travel into the city centre for work, socialising and shopping.

The route above (phase 1) would see 16.6km of rail laid, which would be slightly shorter than the route being proposed in Cork. The cost of the line could be subsidised by funding from the EU and through levies on development in areas close to the projected route. Over 50% of the extension of the LUAS line to Cherrywood was raised though levies on developers and the development of the Luas Red Line in Dublin was facilitated by significant EU funding under the European Regional Development Fund. Cork City Council have recently sent a delegation to Europe to discuss funding for its proposals.

With almost 1,000 new homes set to be built in Mungret it is crucial that the area is connected to the city centre by public transport. A tram line would make the area more attractive for families and prevent vehicular congestion building up in Mungret and surrounding areas. It would also provide residents with a direct and reliable link to the city centre, hospital, and university.

In time, the line could be extended to connect Mungret with the city centre via the Dock Road, potentially opening up land for residential development along the docklands and Greenpark Race Course.

Other routes could include a line alongside the old Foynes railway track connecting Raheen industrial park and the new housing developments proposed for the south of the city with the wider network. 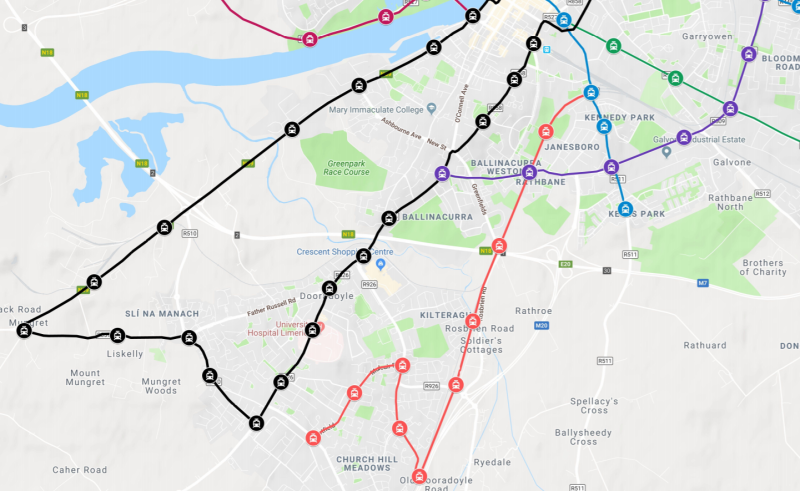 A number of interconnected lines on the north of the city could provide access to Thomond Park, the Gaelic Grounds, Jetland Shopping Centre, LIT, Thomond and Cratloewood student villages, Caherdavin, the Ennis Road and park and ride facilities located at Coonagh roundabout which commuters arriving from Shannon, Ennis and other towns could use to access the city centre. The line would also open up land for development to the north of the Shannon river and connect Moyross and Ballnanty with the rest of the city.

The eastern part of the city could be serviced by a line which would run from a park and ride facility at the Newport Roundabout via Annacotty, Monaleen, Kilmurray, UL and Groody. This could be connected to a line running from Castletroy to City East via the Golf Links Road and into the city centre.

It’s hard not to feel that Limerick is on the road to success. The dark days of the recession are largely behind it, €1.5 billion has been invested in the city and 15,000 jobs created over the last four years, the local economy is performing well and the city has been successful in attracting companies to locate there.

Limerick 2030 has been a welcome success story and the excitement of having UL open on the former Dunnes Stores site at Honan’s Quay is palpable, but if Limerick wants to continue to develop and become a top tier city, not just within Ireland but also internationally, it has to have a public transport system to match that ambition.

Limerick is fortunate in that it is still at a size that is small enough to design and construct a world class transport network with relatively low levels of disruption. By developing the transport network now the city can develop and grow around and alongside the network over the next 20 to 30 years, instead of retrofitting the city when it’s too late.