Northern Ireland (despite recent turmoil over the border and Brexit) has gone through something of a renaissance since I last visited in 1996. According to the tourist figures published earlier this year 353,000 people from the Republic visited Northern Ireland in the first nine months of 2017, a jump of 25 per cent (this followed a 27% jump the year before). According to Tourism NI, well-established visitor experiences from Titanic Belfast to the Causeway coastal route and locations from the television series Game of Thrones are behind the sudden upsurge in visitors to the North. And it’s not just from the Republic either. Northern Ireland enjoyed overall growth from Great Britain, Europe and North America in 2017 and according to Tourism NI’s chief executive John McGrillen this is partly due to a change in the way people view the North, no longer viewed solely through the prism of the Troubles.

And I’d have to agree. From the moment we arrived at Belfast airport (we flew in from London) we received a céad míle fáilte (controversial, I know) that would easily rival anything you would receive “down south“. The locals couldn’t have gone more out of their way to make us feel welcome.

We arrived into Belfast airport late on the Friday night and after quickly scanning our rental car for RUC tracking devices (there weren’t any) we started the short drive into Belfast city. Admittedly I was a little paranoid at first and was quick to spot the Union Jacks on the lamp posts on the way in (my wife, who is from the South of Europe, didn’t notice at all) but after parking the car and meeting my father in the hotel bar for a couple of creamy pints of Guinness (they are also just as creamy as “down south“) the paranoia quickly disappeared.

On Saturday morning we were collected by a black cab from Paddy Campbell’s Famous Black Cab Tours to do a tour of the political murals and the peace line. We started the tour at the City Hall where coincidentally there was a UVF memorial parade taking place (one of thousands of parades that take place each year). We then drove to Bombay Street which was burned to the ground by a Loyalist mob on 15 August 1969, an event seen by many as the spark that ignited the Troubles, before driving into the Shankill Road area and stopping at the King Billy mural (of course we jumped in for a photo). Next stop was the peace wall which sits between the Loyalist Shankill Road and the Irish Republican Falls Road area. Built in 1969 to separate Loyalist and Republican communities, the wall (you can pass through the wall at a series of gates during daylight but the gates are locked at night) stretches for over 800 metres and can be as high as 7.5 metres/25 feet in places. There are currently more than 60 such interface barriers across Northern Ireland and while the majority exist within Belfast there are also walls in Derry, Portadown and Lurgan.

The tour then crosses into the Falls Road area where we stopped to see a number of nationalist murals, including the famous Bobby Sands mural outside the Sinn Féin headquarters. The tour, which was supposed to last an hour and a half (the driver was super patient with us and took his time to explain the history and answer any questions we had, so it actually took us over two hours), cost us £36 for three people. An absolute bargain and a must for anyone visiting the city.

Next stop was lunch at George’s Market. George’s Market is a covered Victorian market built in 1890 and houses an eclectic collection of arts and crafts, artisan food and a whole host of other knick-knacks and odd-bins. After lunch we made our way to the Titanic Centre and did the Titanic Experience which is a self-guided tour through 9 interactive galleries which takes approximately one hour and 45 minutes (you could easily spend three hours there). Book tickets online in advance as they only admit a certain amount of visitors per hour. To cap off the day we went for an early dinner in Mourne Seafood Bar followed by pints and traditional music in the famous Kelly’s Cellar which is next door and is one of the locations where Theobald Wolfe Tone and the United Irishmen held meetings in the run up to the 1878 rising. We then visited the funky Cathedral Quarter, which is a series of small lanes full of pubs and restaurants that pour out onto the street. We finished up in the beautiful Crown bar, which is the oldest bar in Belfast and designed as a series of snugs, each complete with its own saloon door. Perfect for a private gathering of friends or mixing with the locals.

On Sunday we started our trip to the Dark Hedges, less than an hour’s drive from Belfast. Made famous by the Game of Thrones, the Dark Hedges are a row of beech trees planted by the Stuart family and designed to impress visitors as they approached the entrance to their mansion, Gracehill house. The Dark Hedges are stunningly beautiful but get there either early or late if you want some privacy. After a quick bite of lunch in the local hotel (which smelt like a hospital and is not recommended), we made our way up north towards the Giant’s Causeway. Now, most people in Ireland are aware of the stories of Finn McCool and his fight with Scottish giant Benandonner, but you honestly can’t be prepared for how breathtakingly beautiful this part of Ireland really is. The Giants Causeway is a series of 40,000 basalt stone columns left by volcanic eruptions 60 million years ago. A true geological wonder and jaw droppingly beautiful. The area is also vast and you should budget three hours to see it properly.

Next up we took a short drive up the road to Carrik-a-Rede rope bridge. You need to buy tickets to make the crossing but the walk there and back is stunning and I would recommend paying the small fee to cross the bridge. When we visited in July there were long queues but it’s well organised and they moved pretty quickly. 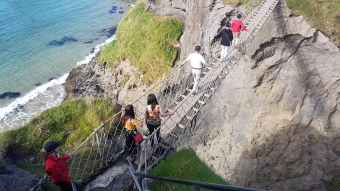 After the bridge we hit the road to Derry taking the coast road via Dunluce castle, Bram Stoker’s inspiration for Dracula. We took the coast road via Portadown and arrived in Derry in time for a quick Chinese (everything else was closed and it was actually very good) and a couple of pints on Waterloo Street (I’d recommend Peader O’Donnells for lively Irish music). The next morning we did the Martin McCrossan city tour (£4, no need to book in advance) which takes you along Derry’s Walls. From the walls you can see The Bogside part of the city, where 28 unarmed civilians were shot by the British army on 30 January 1972, killing 14. You can also see the People’s Gallery murals and the guide will teach you about the history of the Apprentice Boys and about the marching season traditions. We also did the Bogside History Tour which takes you along the route of the Civil Rights March that took place in the lead up to Bloody Sunday and brings you through the Bogside itself, past the Free Derry corner and the Museum of Free Derry (£3 entry for those who have done the tour, it only takes about 90 minutes and is well worth the visit). 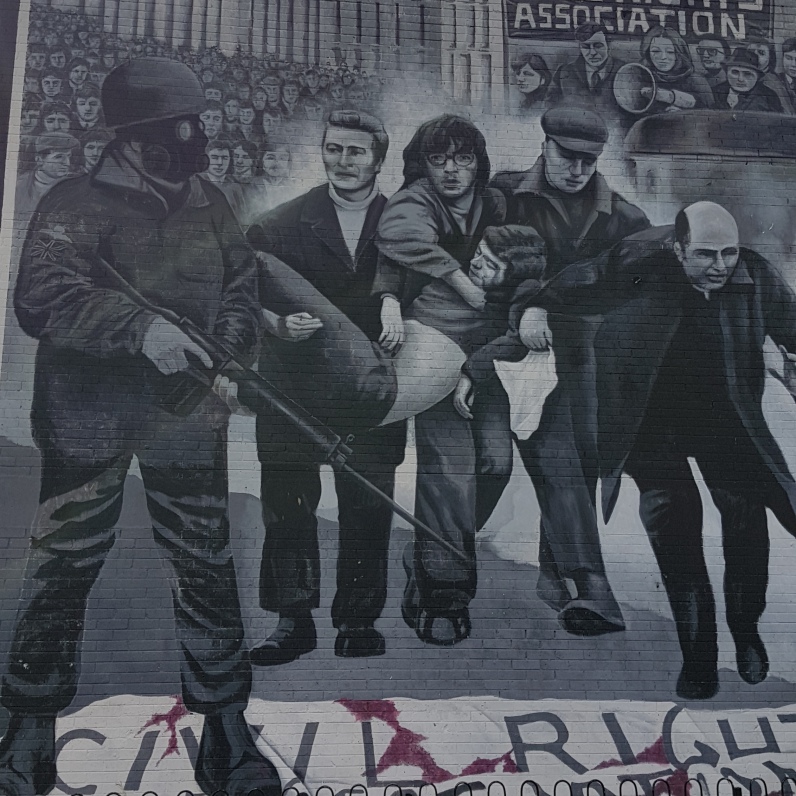 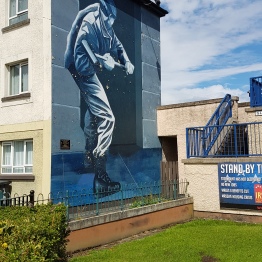 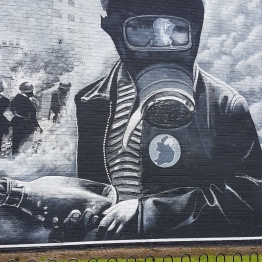