The first thing anyone will tell you about South Africa is that it’s very dangerous and that it has some of the highest crime rates of any country in the world. Pick up a guide book or search online and you will notice large amounts of space describing how best to avoid being hijacked or being caught up in any number of scams or other nasty situations. While I can’t speak for those who live there on a day to day basis (for whom life will of course be very different to someone visiting on holidays) and I don’t deny for one second that serious crime does take place there, my personal opinion is that the safety concern is completely overstated. As long as you apply some common sense and don’t take unnecessary risks you will be fine.

We started our trip with a three night safari in the beautiful Sabi Sands game reserve in Kruger National Park (which is only very slightly smaller than Wales) on the eastern side of the country. Kruger park is divided into national park, which is government owned and managed, and private game reserves, which are privately managed. In the national park most visitors typically arrive in their own car and drive themselves while in the private game reserves game drives are conducted by teams of professional rangers and trackers in open Land Rovers (which usually seat 6 people). In the national park vehicles must stay on the road at all times and need to be back in camp by sunset, while in the private game reserves vehicles can go off road and normally return just after nightfall (one evening we were on the way back to the lodge in the dark and heard some unmistakable roars in the distance – two adult males lions had come into the area, looking to expand their territory and were letting the entire bush know. Thankfully the ranger and tracker were as excited as we were and we were lucky enough to find and shadow the two lions from a distance for approximately 20 minutes or so before they disappeared into the bush in search of a pride of female and teenage lions that we had seen earlier that day). If time and budget permit I would certainly advise taking the private game reserve option. We stayed in the middle of the bush and slept each night to the sound of hyena and bullfrogs and had giraffe, lion, hippo, kudu and monkeys literally metres from our door. We did six game drives and two bush walks (yes we were shitting it, but on the plus side I did learn that hyena poo is white because they can crush and digest bone) over three days and saw lion, buffalo, elephant, leopard and rhino (the “Big Five”) as well as giraffe, zebra, hippo, hyena, wild dogs, wilder beast, eagles, you name it. Be warned though that the morning drives start at 05:30am. 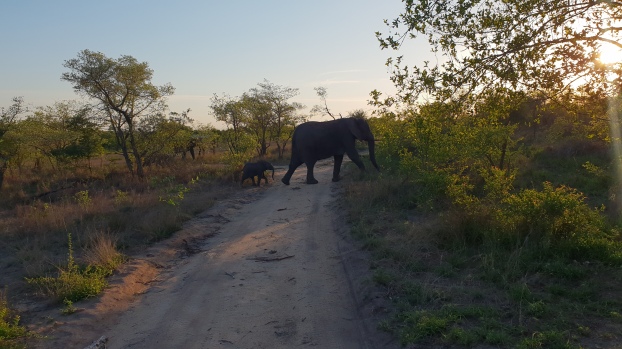 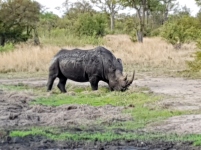 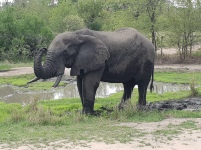 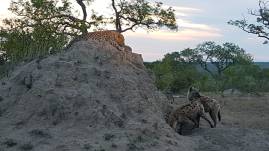 We then flew on to the slightly edgy Durban for two nights which we used as a base for an excursion to Eshowe (about an hour and a half drive from Durban) where we visited Shakaland, a Zulu cultural centre originally created as a set for the mini-series Shaka-Zulu. Shakaland has a slightly Disney-fied feel about it and has certainly seen better days but if you want to experience traditional Zulu culture there aren’t many other options available. The dancing was fantastic and it’s an interesting experience for anyone who wants to learn more about the Zulus, but whether it was worth the diversion is hard to say. While we didn’t have a lot of time in Durban it has some beautiful beaches and amazing surf and interestingly is home to the largest concentration of people of Indian descent outside of India (between 1860 and the early 20th century more than 150,000 indentured Indians arrived in South Africa to work on British sugar plantations). This has had a huge influence on local food and Durban is known for its curry (I’d recommend the House of Curries on the trendy Florida Road). Durban is also the home of Bunny Chow (basically a quarter or half loaf of bread hollowed out and filled with a meat or bean curry – totes amaze balls) and a must try.

From Durban we flew to Port Elizabeth where we hired a car (and survived to tell the tale – we even stopped at the robots (what they call traffic lights) without getting hijacked) and started on a seven day/six night drive along the famous Garden Route (a similar concept to the Wild Atlantic Way in Ireland). The Garden Route runs between Cape Town to the west and Port Elizabeth to the east and the scenery, wildlife, topography, vegetation, and outdoor activities along the way are outstanding. There are also tonnes of spectacular beaches and despite what the locals tell you the water is not as cold as it is in Ireland. We stopped in Jeffrey’s Bay, St. Francis Bay (where unfortunately at least 11 houses were destroyed by fire the day before we arrived), Plettenburg Bay, Knysna (go for lunch in the East Head Cafe, it’s beautiful out there), and Hermanus, staying a night in each with the exception of Jeffrey’s Bay, a major surf town which reminded me of Cairns in Australia where we stopped for lunch (but which I do think would be worth a night), and Hermanus (a four and a half hour drive from Knysna), where we stayed for two nights. 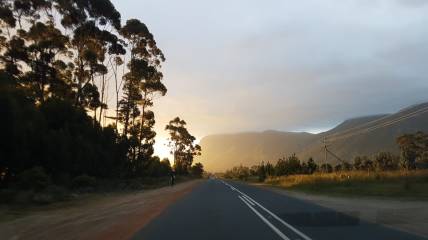 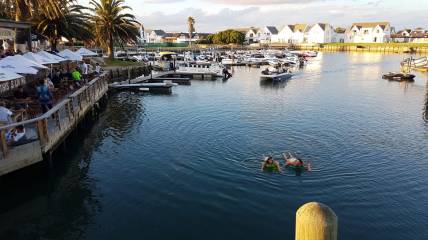 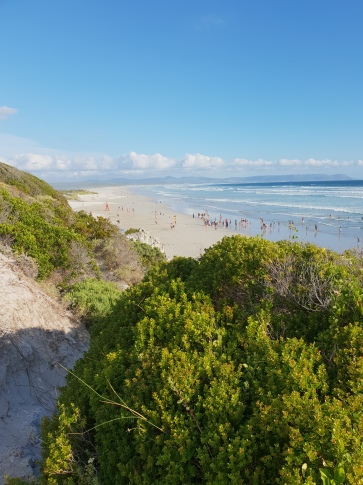 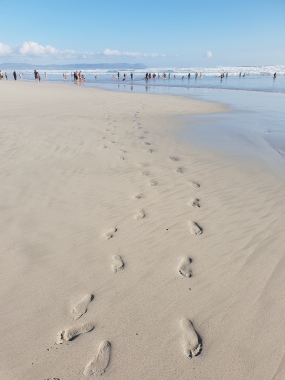 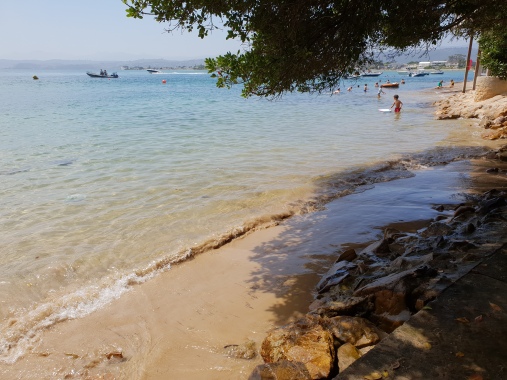 Hermanus is generally regarded as the best land-based whale-watching destination in the world. The whale season runs from June to December and during this time the bay transforms into the swimming grounds for a large number of southern right whales (the sixth largest whale in the world). Unfortunately, by the time we arrived the southern right whales had moved on but we did a sea safari nonetheless and were rewarded with a 500 strong group of seals hunting in the bay (we also saw penguins and albatross). We also learned that there hadn’t been a great white shark sighting in either Cape Town or the Gansbaai area since July (and this was now December). It was suspected that the great whites had moved further east due to a combination of changing water temperatures and the presence of two well known killer whales in the area (which hunt great whites and other sharks). With some accounts estimating that there are less than 4,000 great white sharks left in the world, their absence from an area famed for their presence was a sobering reminder of what is happening to our planet.

From Hermanus we made the relatively short drive to Cape Town where we spent Christmas Eve and Day with relations in and around the beautiful Hout Bay and Camps Bay, cooking meat on the braii (the South African word for barbecue) and drinking cold beer. On Stephen’s Day we drove to Stellenbosch (a beautiful little university town with Cape Dutch, Georgian and Victorian architecture, bags of great restaurants and surrounded by hundreds of vineyards) where we spent a day and night before driving up the road to Franschoek (similar to Stellenbosch but this time with a strong French influence) where we did a wine tasting trip on horse back with Paradise Stables (about £53 per person for a four and a half hour ride taking in two vineyards, including Richard Bransons’ fabulous Mont Rochelle).

We then made the short trip back to Cape Town where we spent the next four days taking in local sights and activities, visiting Boulders Beach where you can visit a 3,000 strong colony of penguins, Table Mountain, and Robben Island, the island where Nelson Mandela was imprisoned in an eight feet (2.4 metres) by seven feet (2.1 metres) cell for 18 of the 27 years he spent in jail during the apartheid era. While Robben Island is a must see, if you decide to visit Table Mountain be prepared for long queues (and book both well in advance). On the way up we queued for two hours in the sun and the queue on the way down was an hour and a half (tip: if you really want to make the pilgrimage consider hiking, it takes around two hours). A trip to the Waterfront area of Cape Town is also worthwhile (although it is a little touristy). It has tonnes of nice bars and restaurants, buskers, a Ferris wheel and a large shopping mall. You can also take boat and helicopter tours from there. While we didn’t do the open top bus tour it is also very popular with tourists. For those looking for a different experience there are a number of walking tours of the townships that you can do which are normally organised by the communities within the townships themselves or by charities with long established connections to the area.

South Africa is about five times the size of the UK and roughly 14 times the size of Ireland. It’s vast, it’s big, and it’s beautiful. It has some of the best food in the world (on par with Japan for me), beautiful wine, the quality of accommodation and service is top class, the people are friendly, it has stunning beaches, mountains, wildlife, it has a rich history and a fascinating blend of influences from Africa, Europe and Asia, it’s got it all. Yes it has its issues (race is still a live issue and will be for some time yet (there was a sheep slaughtered on a beach in Cape Town while we were there to exorcise racist spirits), and the gap between rich and poor is enormous with a quarter (about 11.6 million people) of South Africa’s population living in the 76 largest townships in the country) but when you consider what the country has been through and where it has come from, there is plenty to be optimistic about in Africa’s rainbow nation.