One of the many great things to come from Pontevedra, the Spanish city famously pedestrianised by its Mayor in 1999, was the creation of the Metrominuto. The Metrominuto is a pedestrian map which has been designed to look like a subway map and which shows locations around the city as “stops” connected by different “pedestrian routes”. The map also displays travel distances and average travel times between stops and is available for download at Pontevedra’s mobility website or in printed form from Pontevedra’s City Hall, Tourist Information Offices and local shops. 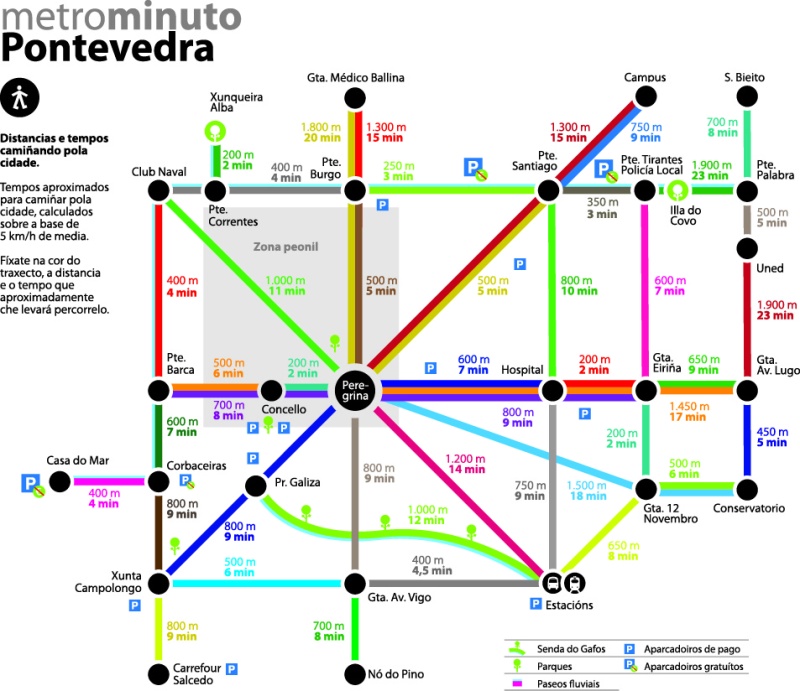 The map highlights how near locations are to each other and encourages travel by foot rather than by car. Walking maps such as these are a useful reminder for people that walking is an engaging and practical mode of transport and, as we show further below, they can be easily adapted for use in an Irish context.

Walking as a mode of transport

As the topic of public transport becomes almost a daily discussion in Ireland it’s important to remember that walking is still the lowest carbon, least polluting, cheapest and most reliable form of transport available to us. Walking provides social, economic, environmental, health and political benefits and with nearly 70% of the world’s population set to live in urban areas by 2030, it is becoming increasingly important that we design our cities in a way that promotes walking as one of the primary modes of transport.

Almost everyone is aware of the health benefits associated with an active lifestyle, but walking environments are not just healthier, they are also wealthier. Recent research by charity Living Streets shows that making places better for walking can boost footfall and trading by up to 40%. In New York, the Department of Transportation used sales receipts to show an increase of 172% in retail sales before and after street redesigns that transformed an underused parking area in Brooklyn. All over the world retailers overestimate how many people shop by car. For instance, a study in Bristol found that retailers on a local high street overestimated the proportion of shoppers arriving by car by 22%. Indeed, according to research done by Transport for London pedestrians spend approximately 65% more than drivers.

A walkable environment – characterised by safe walking paths and equipped with appropriate facilities (e.g. benches, shelter, street lighting and drinking fountains) – can encourage a widespread range of active and healthier lifestyles across all ages. Redesigning the urban environment to encourage walking brings people back out onto the streets and dramatically improves safety and individual confidence. A walkable environment attracts people to public spaces, resulting in natural “eyes on the street”, whereby citizens actively monitor the streetscape, aiding in the prevention of crimes. In Kessler Park, Kansas City, crime dropped by 74% the year that 2.6 miles of land around the park were turned car-free on weekends.

A walkable neighbourhood also increases the potential for social interaction, which in turn can increase the sense of community. One Irish study for example found that residents living in walkable neighbourhoods exhibit at least 80% greater levels of social capital than those living in car-dependent ones, meaning they are more likely to know and trust their neighbours, feel more connected to the community and are more likely to be politically involved.

People who are physically active live longer, but unfortunately inactivity is on the rise. Physical activity in the USA has dropped 32% in the last 44 years and 45% in only 18 years in China. The World Health Organisation (WHO) now identifies inactivity as the fourth leading risk factor for global mortality. In 2014, more than 1.9 billion adults – 39% of the global population aged 18 and over – were overweight and over 600 million of these (13%) were obese. Obesity reduces a persons life expectancy by an average of three years.

A study by Walk with a Doc meanwhile has found that walking can reduce the risk of heart disease, stroke and colon cancer and lower the level of cholesterol, blood pressure and body fat. Walking also increases muscle flexibility and joint movement and helps to strengthen bones, which in turn reduces the risk of injury from falls. Walking also improves our mood. It reduces the risk of stress, anxiety and depression, positively affecting people’s mental health and happiness. In fact, those who walk more than 8.6 minutes per day are 33% more likely to have better mental health.

Tourism is heavily influenced by a city’s infrastructure as pedestrian inaccessibility can create hardship. Walkability creates public spaces that are a pleasure to pass by, and implementing small and well planned distances between destinations enhances the pleasure of strolling through a city and enjoying local services, shops and landmarks. The pedestrianisation of the north side of Trafalgar Square brought a 300% increase in visitors. The same happened to Times Square after it went car-free and it is now crossed by 300,000 pedestrians each day.

There are many ways that cities can promote walking, including car free initiatives, pedestrian and health campaigns, economic incentives, pedestrianised streets, road sharing, traffic calming measures, improved signage, building parklets, covering urban spaces to protect users from adverse weather, promoting street events and public art as well as fairs and markets, inclusive design that takes into account the needs of the elderly, the young and the disabled, improving lighting and security, providing street furniture and by making the environment playful and interactive.

Some of these initiatives of course take time and planning to introduce, but some of them can be done almost immediately. The Metrominuto for example is something which could be introduced into every major town and city in Ireland in a matter of weeks.

Below is an example of one potential design that could be used for the city of Limerick, but which could easily be adapted to Cork, Galway, Dublin, Waterford, Kilkenny, Belfast and Derry. 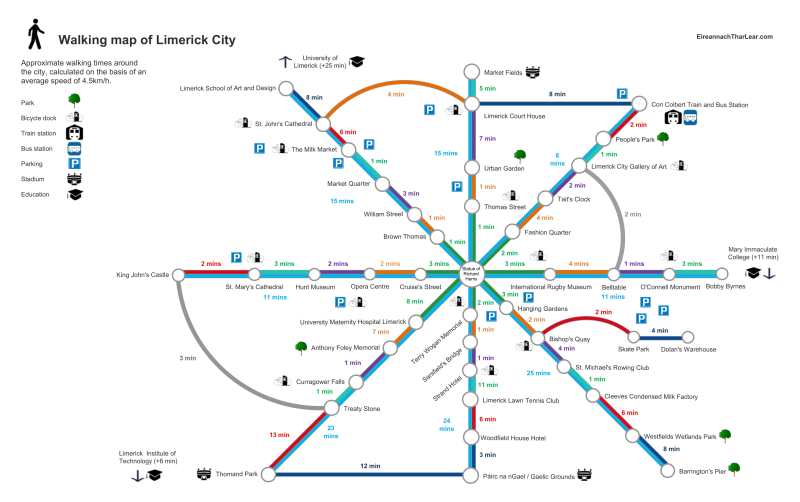 According to the Central Statistics Office’s most recent National Travel Survey 74% of all journeys in Ireland are still made by car (and of those, 95% are as the main driver). Of all car journeys made, 52% were under two kilometres and 70.4% were under four kilometres. Maps like the Metrominuto or the map we have created above can illustrate to local residents and tourists how close key locations within the city really are and encourage people to walk instead of drive. By doing so we can improve our environment, social cohesion, health, wealth, and most importantly, happiness.